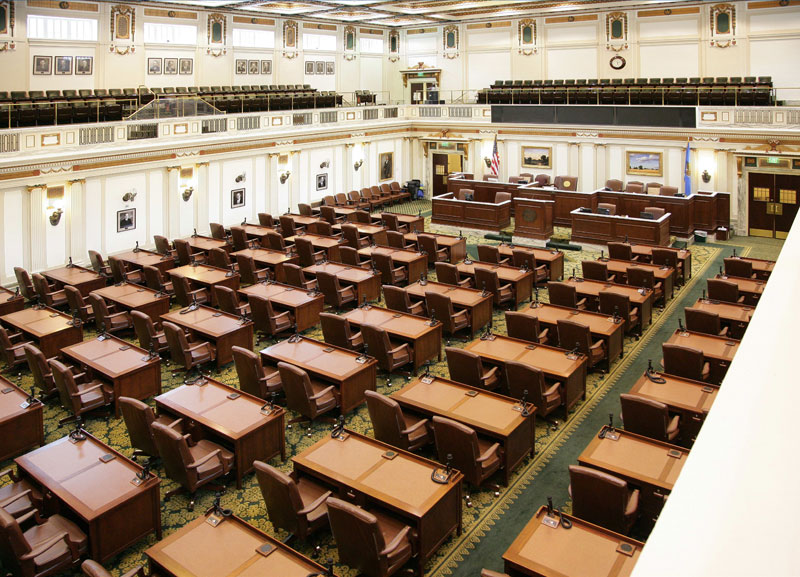 This legislative season has been something of a mixed bag, with some victories, some disappointments, some challenges, and one particular story that took us by surprise.

In Oklahoma, the Parental Rights Amendment (PRA) resolution, SCR 1, passed the House of Representatives by unanimous consent on April 3, making Oklahoma the seventh state to urge Congress to take up the PRA. The resolution already passed the Oklahoma Senate on February 13.

In Nevada, AB 430 would require home visits for any family of a newborn determined by the Divisions of Child and Family Services to be “at risk,” the definition of which includes “any other risk factor identified by the Division.”

Fortunately, we and several allied organizations were able to sound the alarm, and Nevada residents responded. Their outcry resulted in an amendment to the bill that will make sure these visits are voluntary and not mandatory. (We are still wary of the bill and will continue to watch it closely, but this change is a significant victory.)

Another Nevada bill, AB 295, would require comprehensive sex education in public schools and replace the current opt-in requirement with an opt-out, allowing schools to include any child if they don’t hear an affirmative refusal from the parent. But the outcry against that bill was sufficient to keep it from going anywhere–another win.

In Florida, the Parents’ Bill of Rights (HB 1171) was unanimously approved by the House Education Committee on March 21. BREAKING: HB 1171 just passed the House Health and Human Services Committee today (April 16) in a 2 p.m. hearing. The bill still has one more committee and a floor vote to make its way through the House, but this is an exciting start.

Meanwhile, its companion in the Senate, SB 1726, passed the Senate Education Committee on April 10 by a 5-3 vote. SB 1726 still faces two more committees and a floor vote, and the legislative session is scheduled to end in less than three weeks.

In short, the Parents’ Bill of Rights has a long way to go and a short time to get there, but it remains alive in both chambers of the Florida legislature.

In Kentucky, unfortunately, that is not the case. Both the Parents’ Bill of Rights (SB152) and a Parental Rights Amendment resolution (SCR 106) failed to pass the Kentucky legislature before it adjourned for the year.

While disappointing, this year’s attempt has brought allies together and hopefully paved the way for success in the future. We appreciate so much the work of Senator Steve West and several of our organizational allies in championing these measures, and we look forward to working with them again in 2020.

Pennsylvania Rep. Cox (R-129) plans to introduce another bill soon that will preserve parental rights with “strict judicial scrutiny” in the courts. Obviously, we support both of these bills.

We are also facing some negative challenges, including bills across the nation to rob parents of the right to make informed medical decisions for their children. Bills to remove religious or philosophical vaccine exemptions include Iowa’s HF 206 and Oregon’s HB 3063.

Iowa’s HF 272 would require home visits for any family who chooses to home school. (A similar bill proposed in Illinois was quickly defeated by public outcry.)

Obviously, all of these bills threaten children by threatening parental rights. Sadly, they are only a sampling of the many bad bills out there this spring.

One particularly heinous bill, California’s SB 276, would limit medical exemptions so that not even doctors licensed by the state, but only the actual state department of health, can authorize medical exemptions for vaccines. (California has already outlawed every other kind of exemption.)

Giving the State unchallenged control over your child’s health decisions? Over the objections of not only parents but even their doctors, too?

It is difficult to see how this idea is even American. It threatens parental rights, medical rights, and most of all, our children.

Fortunately, even vaccine mandate proponents in the legislature are shying away from this one. But we will be watching it closely, and urge California residents to contact your lawmakers and make your opposition known.

But then there’s Indiana.

When our call went out for Resolutionaries last August, we were pleasantly surprised by the response from Indiana, a state where we’ve had no real activity in the past. Then our U.S. House sponsor on the PRA lost his reelection bid in November and we found a new champion in Rep. Jim Banks—from Indiana.

Then the session started, and our (new) volunteers began in earnest to pitch the parental rights resolution to legislators.

We found a few interested parties, but it was looking like next year would be the earliest we could hope to make any progress. We found ourselves late in a session that only lasts through April.

Then in late March we had one remarkable week.

On Monday, we had nothing. One volunteer had scheduled a meeting with three or four lawmakers, including state Senator Dennis Kruse, that Tuesday. Her hope was to introduce the idea of a 2020 resolution, since it was already so late in the current session.

With others, the volunteer had also arranged for Rep. Banks to speak at a state home school convention that Saturday.

But Sen. Kruse looked over the resolution proposal and asked, “Why don’t we have something going right now?” His colleagues readily agreed.

For a couple of days, there was even hope Rep. Banks would be able to announce the resolution’s introduction to the convention that very week.

The resolution didn’t move quite that fast, but it was certainly moving. Senate Resolution 63 (SR63) was introduced in the Senate on April 1 and referred to the Committee on the Judiciary.

SR 63 only has until April 29 to make it through both houses, so it remains a long shot for this year. But we went from “nothing on our radar” to drafted and introduced in under two weeks. It suddenly felt like anything was possible.

Especially, for some reason, in Indiana.

Thank you for standing with us. Not only your financial support, but your alerting us to these bills and taking appropriate concerted action in your state makes all of these victories possible.