The proposed Parental Rights Amendment will specifically add parental rights in the text of the U.S. Constitution, protecting these rights for both current and future generations.

SECTION 1
The liberty of parents to direct the upbringing, education, and care of their children is a fundamental right.

SUMMARY: Parental Rights, currently recognized as implied rights, will become specifically enumerated in the text of the Constitution.

"The liberty of parents to direct the upbringing, education, and care of their children..."

In the 1925 decision of Pierce v. Society of Sisters, the U.S. Supreme Court struck down a compulsory attendance act that required all parents to send their students to public schools, instead of private or religious schools. The court concluded that the act was unconstitutional because it "unreasonably interferes with the liberty of parents and guardians to direct the upbringing and education of children under their control."

In 2000, the Supreme Court cited a long train of previous cases which showed that the right of parents to direct the education and upbringing of their children is a fundamental right. The following passage, taken from Troxel v. Granville, highlights the rich history of this fundamental right:

In subsequent cases also, we have recognized the fundamental right of parents to make decisions concerning the care, custody, and control of their children. See, e.g., Stanley v. Illinois, 405 U.S. 645, 651, 92 S.Ct. 1208, 31 L.Ed.2d 551 (1972) ("It is plain that the interest of a parent in the companionship, care, custody, and management of his or her children 'come[s] to this Court with a momentum for respect lacking when appeal is made to liberties which derive merely from shifting economic arrangements'" (citation omitted)); Wisconsin v. Yoder, 406 U.S. 205, 232, 92 S.Ct. 1526, 32 L.Ed.2d 15 (1972) ("The history and culture of Western civilization reflect a strong tradition of parental concern for the nurture and upbringing of their children. This primary role of the parents in the upbringing of their children is now established beyond debate as an enduring American tradition"); Quilloin v. Walcott, 434 U.S. 246, 255, 98 S.Ct. 549, 54 L.Ed.2d 511 (1978) ("We have recognized on numerous occasions that the relationship between parent and child is constitutionally protected"); Parham v. J. R., 442 U.S. 584, 602, 99 S.Ct. 2493, 61 L.Ed.2d 101 (1979) ( "Our jurisprudence historically has reflected Western civilization concepts of the family as a unit with broad parental authority over minor children. Our cases have consistently followed that course"); Santosky v. Kramer, 455 U.S. 745, 753, 102 S.Ct. 1388, 71 L.Ed.2d 599 (1982) (discussing "[t]he fundamental liberty interest of natural parents in the care, custody, and management of their child"); Glucksberg, supra, at 720, 117 S.Ct. 2258 ("In a long line of cases, we have held that, in addition to the specific freedoms protected by the Bill of Rights, the 'liberty' specially protected by the Due Process Clause includes the right ... to direct the education and upbringing of one's children" (citing Meyer and Pierce)). In light of this extensive precedent, it cannot now be doubted that the Due Process Clause of the Fourteenth Amendment protects the fundamental right of parents to make decisions concerning the care, custody, and control of their children. (emphasis added)

SECTION 2
The parental right to direct education includes the right to choose, as an alternative to public education, private, religious, or home schools, and the right to make reasonable choices within public schools for one's child.

SUMMARY: Parents have a right to make reasonable choices for their child in public schools, such as opting their child out of classes the parents find objectionable. It does not give parents any power to dictate curriculum or other choices by the school for the student body at large.

In 2005 the Ninth Circuit Court of Appeals determined that a parent's fundamental right to direct their child's education ends at the threshold of the school door (Fields v. Palmdale,427 F3d 1197, 2005). This section will return to parents the right to make reasonable decisions for their child, even in the public schools. It does not include any right to make decisions for others' children or the school as a whole. However, it sets a low standard that parents need to reach to make decisions for their own student. To override this right, it would not be enough to show that, for instance, the request is not the best for the student or the school. The government would have to show that a parent's request was unreasonable.

The "reasonableness standard" is the lowest standard in constitutional law, and therefore the easiest test for parents to meet.

SECTION 3
Neither the United States nor any State shall infringe these rights without demonstrating that its governmental interest as applied to the person is of the highest order and not otherwise served.

SUMMARY: While parental rights do not include a right to commit child abuse or neglect, they are due the same high legal protection as other fundamental rights.

". . . demonstrating that its governmental interest as applied to the person. . ."

In early 2006, the U.S. Supreme Court used this very language when talking about violations of religious liberty. According to the Court, the government must "demonstrate that the compelling interest test is satisfied through application of the challenged law 'to the person'--the particular claimant whose sincere exercise of religion is being substantially burdened."Gonzales v. O Centro Espirita Beneficente Uniao do Vegetal, 546 U.S. 418, 430-431 (2006). The text of this proposed parental rights amendment merely takes this well-established principle of law, and applies it explicitly to the fundamental right of parents.

". . . of the highest order and not otherwise served."

In 1972, the U.S. Supreme Court held that in order for the state of Wisconsin to override the rights of Amish parents, the government had to show that it had a compelling interest in requiring students to stay in school until age 16. Speaking of the right of the parents, the Court said that "the essence of all that has been said and written on the subject is that only those interests of the highest order and those not otherwise served can overbalance legitimate claims to the free exercise of religion." Wisconsin v. Yoder, 406 U.S. 205, 215 (1972) (emphasis added).

The Supreme Court has required the government to follow this standard whenever there is a violation of a fundamental right. Prominent examples of this are cases that deal with racial discrimination (see Adarand v. Pena, 515 U.S. 200, 227 (1995): "All racial classifications, imposed by whatever federal, state, or local governmental actor, must be analyzed by a reviewing court under strict scrutiny. . . . Such classifications are constitutional only if they are narrowly tailored measures that further compelling governmental interests"), restrictions on free speech (see Widmar v. Vincent, 254 U.S. 263, 269-270 (1982): Whenever discriminating against speech on the basis of its content, the government "must show that its regulation is necessary to serve a compelling state interest and that it is narrowly drawn to achieve that end"), and invidious discrimination against religion (see Church of the Lukumi Babalu Aye, Inc., v. Hialeah, 508 U.S. 520, 546 (1993): "To satisfy the commands of the First Amendment, a law restrictive of religious practice must advance 'interests of the highest order' and must be narrowly tailored in pursuit of those interests." In all these cases, the government must prove that it has a compelling interest, before the fundamental freedom at stake can be limited.

SECTION 4
The parental rights guaranteed by this article shall not be denied or abridged on account of disability.

SUMMARY: Discrimination against persons with disabilities or parents whose children have disabilities is prohibited.

"...shall not be denied or abridged on account of disability."

This language follows the structure of existing constitutional prohibitions against denying the right to vote on the basis of race (Amendment 15), sex (Amendment 19), the paying of a poll tax (Amendment 24), and age (Amendment 26). It seeks to guarantee to persons with disabilities the same legal presumption of parental fitness that is extended to every other parent.

Read more about parental rights for parents with disabilities.

SECTION 5
This article shall not be construed to apply to a parental action or decision that would end life.

SUMMARY: The amendment will not apply in cases where a parent's action or decision would end life.

Section Five stipulates that the Amendment will not apply to life-ending decisions. Current law will continue to control in that rare instance. This exclusion was a necessity to avoid the appearance that the PRA would affect the abortion issue either way, which would make its passage a political impossibility.

so we can send you updates and critical alerts when we need you to contact congress.

about the Amendment with your friends!

whatever you can. We rely completely on donations to operate, and every bit helps! 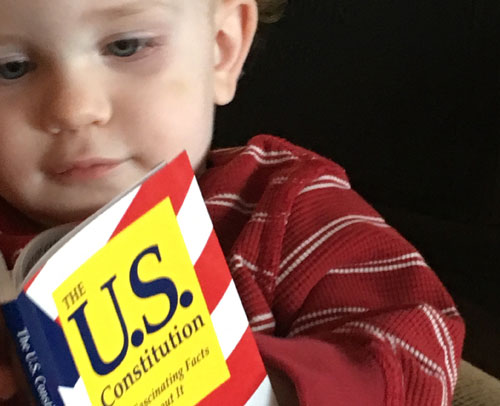 Update: The Parental Rights Amendment is currently in the U.S. Senate, and is being introduced in the U.S. House. Help urge Congress to pass it. 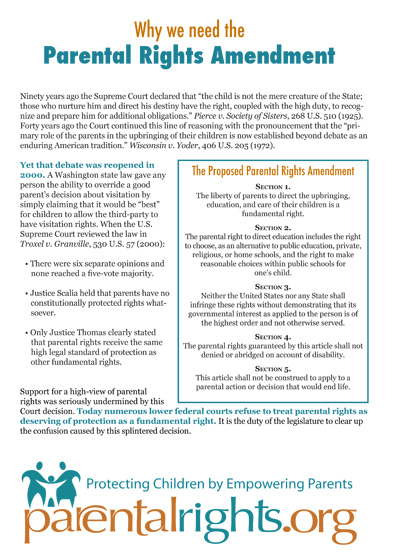 Frequently Asked Questions About the Amendment