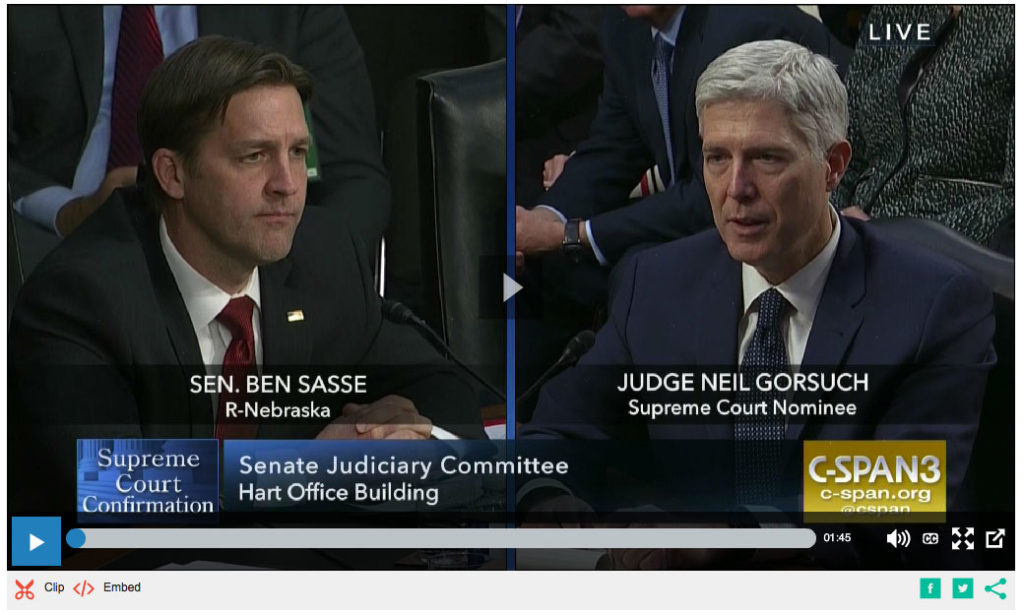 Supreme Court nominee Neil Gorsuch last week fielded a question from Senator Ben Sasse (R- Nebraska) regarding the application of international law in judicial interpretation. In years past, this question has been a vital part of the discussion of parental rights, due to concerns that international treaties and precedents might provide a means to override parental rights in American courts. So we took great interest in Gorsuch’s answer, featured in the video below. Senator Sasse asked, “As a sitting Supreme Court Justice tasked with upholding the U.S. Constitution, is it ever appropriate to cite international law? And if so, why?”

After naming specific, limited instances in which such reference would be “not just proper but necessary,” Gorsuch proclaimed that, “as a general matter, Senator, I would say it’s improper to look abroad when interpreting the Constitution.”

To be clear, ParentalRights.org as an organization does not hold a position on the Gorsuch nomination. But we do like his answer to this one question on this one issue.

In fact, if all Supreme Court justices and federal judges were in agreement on this question, Section Six of the proposed Parental Rights Amendment would not be necessary. That section states, “No treaty may be adopted, nor shall any source of international law be employed to supersede, modify, interpret, or apply to the rights guaranteed by this article.”

But since not all justices agree with this point, we look to this section of the Parental Rights Amendment, not new Supreme Court justices, to protect our rights from this threat.

While we like Neil Gorsuch’s response to this question, however, we do not see him as a savior for parental rights on the Court. The media have often likened Gorusch to his predecessor, Antonin Scalia, as a champion of the “originalist” view of legal interpretation. But that very position led Scalia to declare in the Troxel case that the Constitution’s silence on parents’ rights renders him powerless to protect them.

In his dissent, Scalia wrote, “while I would think it entirely compatible with the commitment to representative democracy set forth in the founding documents to argue, in legislative chambers or in electoral campaigns, that the State has no power to interfere with parents’ authority over the rearing of their children, I do not believe that the power which the Constitution confers upon me as a judge entitles me to deny legal effect to laws that (in my view) infringe upon what is (in my view) that unenumerated right.”

If Gorsuch follows Scalia’s path, he would provide no more protection for parents’ rights than Scalia did.

This, also, is a reason to adopt the Parental Rights Amendment. Only by putting the fundamental right of parents to direct the upbringing of their children into the Constitution can we protect it from both international and domestic legal challenges.

There is no such thing as a perfect Supreme Court justice – and we certainly could never find nine of them! In their absence, parental rights must be protected in the text of the Constitution instead.

Regardless of who next puts on that robe, we want the entire Court bound by the principle that innocent parents make the best decisions for their children. With your help, we can secure that very protection through passage of the Parental Rights Amendment.

To support our efforts with your generous contribution, please click here.

Posted in All Nationwide Newsletters and tagged Gorsuch, news
← Time to Get the Word Out (New Video)How Do We Unite Congress? →