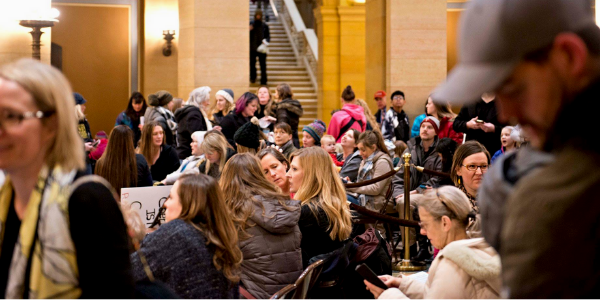 Minnesota citizens rally in 2019 to oppose a change in state law that would have limited their choices as parents.

Unfortunately, we were right.

Last fall when DC was considering a bill authorizing minors as young as 11 to consent to vaccines without their parents’ knowledge or consent, we warned that if the effort passed, it would soon be copied in the states as well.

That bill was passed over our objections, and last week, lawmakers in Minnesota proved our prediction correct.

On Thursday, May 15, Rep. Freiburg and Sen. Eaton introduced identical bills, House File 2625 (H.F. 2625) and  Senate File 2553 (S.F. 2553), to allow doctors to secure legally binding consent for vaccination from minors as young as 14—even younger if the doctor claims the child is ready to make such a decision.

Sometimes I really do hate to say, “I told you so.”

These bills are concerning for several reason, regardless of one’s opinion of the vaccines themselves.

First, there’s the inherent conflict of interest. The law allows doctors to give the vaccination to children as young as 12 “upon determination by the health care provider proposing to administer the vaccine that the minor is capable of consenting to the proposed vaccine” (emphasis added).

Now, there are instances when it is appropriate for a judge, as an objective third party, after considering all the evidence and circumstances, to empower a minor to make a decision on their own.

But under this bill, the doctor who is going to give the shot, who is going to get paid for giving it, gets to decide whether the child is “capable of consenting.” No, most doctors won’t prioritize financial gain over a child’s health. But that doesn’t mean the incentive isn’t there for those who do.

But the bigger concern is that the bill robs the child of the protections of a wiser, more experienced, wholly invested (and usually better-informed) adult: their parent.

Is a 12-year-old ready to make a vaccine decision? We already have an answer to that question from the US Supreme Court, though Minnesota lawmakers don’t seem to want to hear it:

“Most children, even in adolescence, simply are not able to make sound judgments concerning many decisions, including their need for medical care or treatment,” the Court declared in 1979. “Parents can and must make those judgments” (emphasis added).

The danger here is not that the bill violates parental rights per se, but that in doing so the bill puts the health or even lives of adolescents at risk.

Children are not ready to track their own medical history, let alone their family medical history. They may miss warning signs, they are more prone to take unwarranted risks, and they don’t often see the big picture or all of the long-term effects of their decisions.

The Supreme Court knew this. Parents know it. You and I know it.

Truth is, most adolescents know it, too, if you give them a moment to think about it.

So why can’t Minnesota’s lawmakers get it?

Children are entitled to the wisdom and experience of their parents to help protect them from long-term consequences and permanent decisions they’re not ready to make.

So just why are lawmakers so bent on robbing our youth of these protections at such a vulnerable time?

Regardless of your position on any particular vaccine, it is vital that we stand together on this. We must defend the right of all children to the protection that comes from their own parent’s wisdom, experience, and unique personal knowledge of that child.

Fortunately, there is an active community of concerned Minnesota parents already voicing concerns about these bills. If you live in Minnesota, you can reach our state coordinator Angie Gallagher here to get plugged in with this group.

You can also email or call your state lawmakers in both houses and urge them to oppose H.F. 2625 and S.F. 2553. (Find their contact info by putting your address in the “Who represents me?” box at leg.mn.gov.)

And if you don’t live in Minnesota, I would urge you to stay vigilant; your state could very well be next.

Posted in All Nationwide Newsletters and tagged dc, Legislation, Minnesota, updates, Vaccinations, vaccines
← Empowering Volunteers to Bring Change to the StatesLending a Little HELP to the Senate’s Discussion →