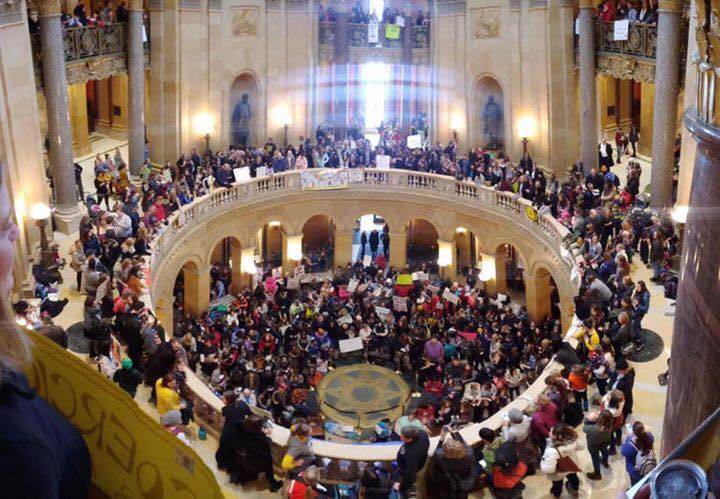 Our Resolutionary Campaign is in full force, currently pursuing passage of Parental Rights Amendment Resolutions in six states. In addition, more than a dozen battles are looming in other states, most over bills that would threaten everything from vaccine exemptions to the privacy of your own home.

There’s a lot to cover, so I’ll dive right in.

Resolutions calling on Congress to send the PRA to the States for ratification are on the table in six states, though only two have been introduced so far. In the lead is SCR 1 in Oklahoma which passed the state Senate on February 13. If the House adds its approval in the coming weeks, Oklahoma will be the seventh state to call on Congress to support the Amendment. (Six states passed resolutions in 2010-2013.)

SCR 106 in Kentucky was introduced by Sen. Steve West on February 14th. Because Kentucky has deadlines for bills but not for resolutions, the latter often sit until near the end of the session, so “no news” at this point is not necessarily bad news; we’ll have to be patient. Resolutions in Kentucky have been known to pass in as little as three days.

In three other states—Florida, Texas, and West Virginia—we have lead sponsors but have not yet seen the resolutions introduced. And an effort in South Carolina is under way, but we don’t have a sponsor there yet.

The lead sponsor for our resolution in Florida is also looking to champion a bill that would preserve parental rights under Florida law. She plans to introduce both together once they are properly drafted and ready to go.

In Kentucky, the same Sen. West introduced SB 152, the Parents’ Bill of Rights, which passed the Senate Judiciary Committee last Thursday (Feb. 21). Some of the language is still being ironed out through anticipated floor amendments before the final Senate vote, after which the bill will move to the House. ParentalRights.org does not have volunteers “on the ground” in Frankfort, but we are actively working with key allies to promote this work.

Vaccines are perhaps the most contentious aspect of the parental rights issue. We do not hold a position on the medical efficacy or safety of vaccines, but we are passionate about the liberty of parents to make informed medical decisions for their children.

The following states are currently considering legislation that would end vaccine exemptions or make them more challenging for philosophical or religious reasons:

Vermont HB 238 would eliminate religious exemptions for all vaccines.

New Jersey SB 3818 would make it more difficult to claim a religious exemption for vaccines.

Kentucky SB 133 would eliminate vaccine exemptions for college students. (This is outside our normal focus, but the intersect is those students who are still under the age of 18 and who, with their parents, oppose the vaccines.)

Maine LD 798 would eliminate all philosophical or religious exemptions. Our allies at Homeschoolers of Maine (HOME) just alerted us that it is scheduled for committee on March 13 at 1:00 pm in Room 208 of the Cross Building in Augusta. (Be watching for further updates.)

Nevada AB123 would not eliminate philosophical or religious exemptions, but would require parents to file a letter of exemption every year instead of just once, which may create an additional inconvenience for parents who choose to exercise that right.

Oregon HB 3063 would remove philosophical or religious exemptions to any vaccinations.

Although  Iowa’s HF 206, filed by Rep. Mascher, would eliminate religious exemptions, SF 239, filed by Sens. Guth and Zaun, would preserve these exemptions and allow for philosophical exemptions as well.

And Arizona’s legislature is considering HB 2470, HB 2471, and HB 2472, a series of bills by Rep. Nancy Barto that would strengthen the right of parents to make informed decisions for their children regarding vaccination and antibody titer testing (used to identify whether a child has antibodies for a particular disease). Two of these bills (HB 2471 and 2472) appear poised for a vote in the House soon.

Another troubling trend on the rise is home visitation programs around the country. Where these programs are voluntary, they do not threaten parental rights. In some states, though, the intention seems to be to put a government agent into the home of every newborn child, whether the parents want it or not. And these agents are, of course, mandatory reporters, which renders their visit a forensic search.

The home visitation bills we are watching, whether for voluntary or mandatory visits, include the following:

Oregon SB 526 calls on the Oregon Health Authority to study home visits and report to an interim health care committee of the Legislative Assembly later this year. Study bills are often precursors to actual changes in law, and Oregon Governor Brown already communicated in her budget proposal that she would like to make these visits “universal.”

Washington’s “Welcome to Washington Baby Act,” SB 5683, would establish universal home visiting programs to link families of newborns to state services and resources. At present the measure is voluntary, but the trend especially in Washington and neighboring Oregon seems to be toward more and not less intrusion.

In summary, there is a lot going on throughout the states that would affect your right to make the best decision for your child. As we watch these and other threatening or promising bills, we invite you to watch with us and alert us if you learn any of these are moving. We would also ask you to standby for alerts that might call on you to contact your lawmakers to support any good bill or oppose the bad.

Thank you for standing with us as we look to protect your children by empowering you, their parents, to make the vital decisions that will shape them for life!

P.S. — ParentalRights.org relies entirely on donations from supporters just like you in order to fight for your parental rights. Could you take a moment today to start a monthly investment, or even a one-time donation, to help us continue to monitor and report on these major parental rights issues?