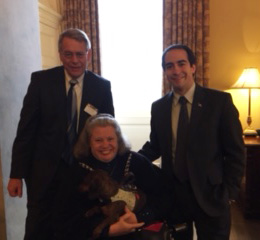 Report: Busy in the State House and in the U.S. Senate

ParentalRights.org has been busy in the state house and in the U.S. Senate in recent weeks, working to pass parental rights legislation and see the Parental Rights Amendment introduced in the new Congress.

By mid-January, ParentalRights.org volunteers were working with lawmakers on active parental rights legislation in four states: Maine, Mississippi, Missouri, and Wyoming. As of this writing, three of those remain viable and two more efforts have been added to the list. Our effort in Mississippi, HC2, failed to clear the House Constitution Committee by the January 31 deadline and thereby failed. We will work with lawmakers there to try again next year.

In addition to these efforts, we have added support for bills in Alaska and New York, though those are not our typical parental rights-defining legislation.

National Efforts
Meanwhile, new ParentalRights.org President Jim Mason joined Government Relations Director Will Estrada on Capitol Hill last Thursday to meet with key Senators about the proposed Parental Rights Amendment.They met up with our outreach coordinator Melissa Ortiz to visit the offices of several key Senators, including members of the Senate leadership, to pitch the proposed Parental Rights Amendment (PRA). They also took the opportunity to meet with roughly 50 other organizations near the Capitol to educate them on this important issue. Meanwhile, Community Liaison Martin Brown met with the staff of a key House lawmaker, also to pitch the PRA.

Though the Senate is currently swamped with confirmation hearings, our allies there give us every confidence we will see the PRA re-introduced early in this session, perhaps by the beginning of March.

By the Numbers: State and National Legislation

To see the Parental Rights Amendment adopted, we need a two-thirds vote in both houses of Congress, followed by a majority vote in the legislatures of three fourths (38) of the states. And it all starts with filing a “concurrent resolution” in Congress.

A concurrent resolution is one designed to be taken up in both houses at the same time, so a House concurrent resolution will presumably be accompanied by a matching Senate concurring resolution. We are already in talks with lawmakers in both chambers and on both sides of the aisle, with the aim of introducing a bipartisan measure in each house.

On the floor of each house, the Amendment must receive a two-thirds vote. That means 68 senators and 290 representatives. This is important to note: because of this two-thirds requirement, adoption of the PRA absolutely must be a bipartisan effort. If the current majority party chose to go it alone, the Amendment would come up 16 votes short in the Senate and 50 votes shy in the House. And that’s if every Republican voted for the measure!

This is why spanning the aisle is so important. And that’s why our representatives on Capitol Hill last week were meeting with lawmakers from both sides of the aisle to get on record in supporting parental rights.

Only together can we protect children by empowering all parents through the Parental Rights Amendment.