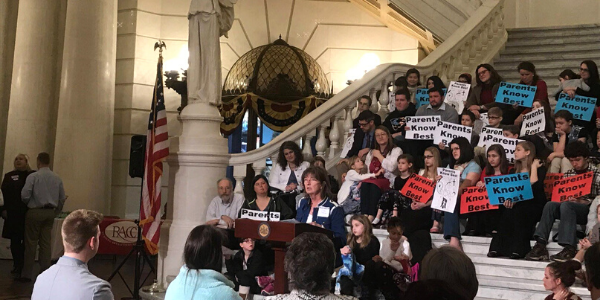 Across the nation, some state legislatures are starting to adjourn for the year. Others have reached cross-over day, where bills have to pass from one chamber to another or they’re dead for the year. Still other legislatures remain in full swing.

All this year, ordinary moms and dads like you, with your energy and passion, have been making your voices heard to our elected officials—and it’s exciting to see how it has paid off! While enacting laws (especially good laws!) can generally take years and multiple legislative sessions, we have seen some victories already this year.

First, numerous states have introduced bills to enshrine fundamental parental rights. While 14 states already have these laws on the books (WV, KS, MI, TX, UT, CO, AZ, NV, VA, OK, ID, WY, FL, and MT), numerous states are working toward joining them, or are taking steps to bolster existing laws protecting these rights. Many of these bills also include curriculum transparency provisions so that parents of children in public schools can know what their children are learning:

Second, ParentalRights.org works on legislation to protect innocent families from the trauma of unnecessary CPS investigations. In New Hampshire, House Bill 1612, which would replace anonymous reporting of child abuse and neglect with confidential reporting, passed the House on March 15 on a 175–161 vote and is pending in the Senate.

Third, ParentalRights.org works on legislation to clarify that reasonable parental decisions that help children gain reasonable independence should not be considered child neglect. We are working with numerous allied organizations in three states to advance these bills. In Colorado, House Bill 22-1090 has unanimously passed the Colorado legislature and is awaiting signature into law by Governor Jared Polis. In Nebraska, Legislative Bill 1000 already went through a legislative hearing in the Judiciary Committee and is pending a vote. And in South Carolina, Senate Bill 288 has been introduced and is pending in committee.

Fourth, ParentalRights.org works to oppose dangerous legislation. We are pleased to report that a dangerous grandparent visitation bill in West Virginia that would have stripped parental rights from the law has died in committee. While we recognize the incredible role that loving grandparents and great-grandparents play in their grandchildren’s lives, not every situation is ideal, and state law must respect the decisions of fit parents. And a dangerous curriculum transparency bill in Ohio that inexplicably requires private and homeschools to publish their curriculum has stalled and is going nowhere.

These victories are because moms, dads, grandparents, and other champions of parental rights across the nation have read our action alerts, picked up the phone, called your state legislators, or otherwise put in the time and effort to shape the laws of our nation. Together, we are hard at work in state legislatures across the nation to support these efforts, and the results have been incredible!