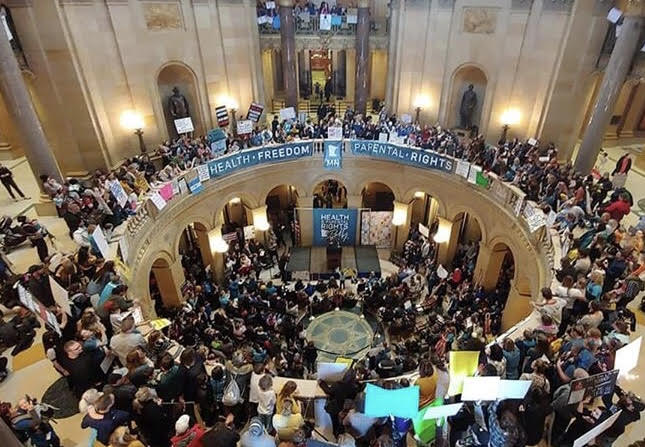 We have seen more parental rights rallies in the last two years than ever before, and they are having a powerful effect for the cause.

To understand how important this is, one first needs to know that ParentalRights.org is almost entirely a grassroots organization. We do not host these rallies; state-level grassroots volunteers do. And our volunteer leaders are amazing.

Last week, a parents’ rights rally at the state capitol in Minneapolis, Minnesota, was a rousing success. Led by state coordinator Angie Gallagher and a team of allies, last year’s first annual rally brought out between 1,300 and 1,900 supporters and stood as the largest rally on any given issue for the entire legislative session.

This year’s rally was attended by more than 2,000 supporters, making it an even bigger success than last year’s. In coordination with the event, a Parents’ Bill of Rights was introduced in the legislature the same day as House File 3645 (H.F. 3645) and Senate File 3513 (S.F. 3513).

We can’t guarantee the bill will pass, but one thing is certain: every time the Parents’ Bill of Rights comes for a vote, lawmakers will remember what their rotunda looked like packed with 2,000+ people who want them to vote “Yes.”

That’s been the effect of a series of rallies and events in Florida. Every time I turn around, state coordinators Jim and Patti Sullivan are heading back to Tallahassee, sometimes alone, but often with a group or as part of a rally with an allied organization, to push forward a similar Parents’ Bill of Rights there. And they have been getting through.

This morning the bill was heard in the Senate Rules Committee, its sixth and final committee hurdle. With a favorable report, House Bill 1059 and Senate Bill 1634 are both ready to be voted on by their respective houses.

If passed, those bills would mean protection for innocent Florida families, thanks to the hard work of our state volunteers.

More state leaders are looking to duplicate these successes in their own states.

For starters, ParentalRights.org Pennsylvania will host a rally at the Capitol in Harrisburg on Wednesday, March 25, to promote House Bill 508, the Parental Rights Protection Act. This will be their second rally, following a successful event I was honored to attend in September of last year.

More details on that rally will be coming out shortly, so watch your email or our website for that alert.

Then, in late April or early May, Lansing, Michigan, will be the site of that state’s first parental rights rally. Plans for that event are still being made, so details will be forthcoming once they’re available. If you live in Michigan, watch your emails for that announcement coming soon.

Rallies don’t always make sense in every state. To have a successful rally, there needs to be a clear action our lawmakers are being asked to take—like supporting S.F. 3513 in Minnesota, or H.B. 1059 in Florida. And it helps to have well-connected allies, like Minnesota Vaccine Freedom or the CHAP homeschool support group in Pennsylvania, already in place to help get the word out.

But where they do succeed, rallies start with volunteers ready to plan a day and urge people to be there.

If you are interested in launching a rally (or just want to check on the status of things) in your state, email our contact coordinator today at Cory@ParentalRights.org.

We are so grateful for the leaders in these states who are putting in such work to make these rallies (and the bills they support!) a success. And we are grateful to you for supporting them through your gifts, your prayers, your attendance, or just your being part of the team.

We couldn’t do any of it without you!